Hobonichi Folder Set by Ryoji Arai - For A6 Size

This set of 3 see-through folders fits perfectly into the pockets of A6 size Hobonichi Techo covers. The folders can store receipts, clippings, and other items to help organize your desk, or carry tickets and other items you want to keep portable and accessible.

Children’s book illustrator artist Ryoji Arai’s three artworks especially drawn for the Hobonichi Techo were chosen for the set of 3.
- The first folder matches the 2021 cover I don’t think anyone knows it, but I’m always singing. It shows a blue bird all dressed up in a beret and necklaces.
- The second folder features the same artwork as the 2019 cover I forgot when it was, but we sure had fun. It’s as if the pink colored cat is talking to us with all kinds of memories.
- The third folder is from the 2014 cover I’ll listen to you anytime, says the donkey. A red donkey with a calming expression seems as if he’s accepting to all kinds of emotions.

The small photos that are collaged are also a point of the design. Let your imagination fly by looking at these folders.

Ryoji Arai was born in 1956 in Yamagata Prefecture. His children’s books are widely acclaimed in Japan and across the world. He won the JBBY (Japanese Board on Books for Young People) award for the book Sound of Taiyo Organ, the grand prize for the Sankei Children's Publishing Culture Award for the book It’s Morning, So I’ll Open the Window, the grand prize for the Japan Picture Book Award for the book Tonight’s Full Moon, and in 2005 was the first Japanese author to win the Astrid Lindgren Memorial Award for children’s literature. Arai created the illustrations in the opening for the NHK Japanese drama television series Jun to Ai and served as the artistic director of the Yamagata Biennale Art Festival. 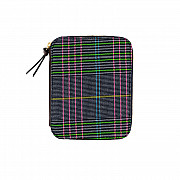